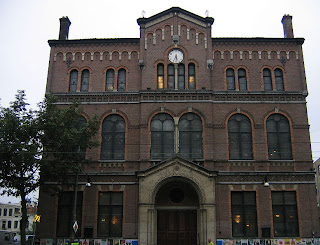 The former church of my ancestors in Amsterdam
As a rabbinical student, I engage in interfaith work which I find very important.

For previous interfaith work, I have attended conferences (such as L.A.'s interseminarian conference 'InterSem') and have written articles and given lectures for both the Dutch Roman Catholic and Protestant churches. One of my more exciting assignments this past month was giving a lecture at the 'Vrije Gemeente', the 'Free Community' of Amsterdam. The Vrije Gemeente originated as a very liberal, 'Unitarian Universalist-esque' Protestant community founded in 1877. Over the centuries, they have held on to their commitment to theological liberalism and humanism. They welcome a wide range of speakers for their Sunday morning activities. 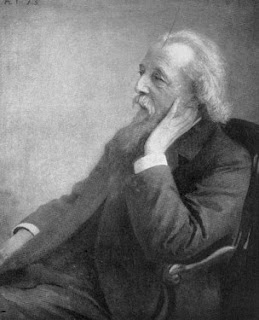 Petrus Hermannus Hugenholtz (my father, z"l, had his nose!)

I approached the Vrije Gemeente last year because I wanted to do an activity for them. My reasons were rather specific and remarkable: the Vrije Gemeente is the church of my direct ancestors.
I am the descendant of one of the oldest families of Protestant ministers and theologians in the Netherlands. (My family goes back to the time of Martin Luther and according to family legend, my paternal ancestors were directly connected to Luther). For 250 years, 50% of my (male) ancestors in the Hugenholtz family trained for the clergy. This tradition ended in 1973 when the last Hugenholtz minister died.
My great grandfather Frederik Willem Nicolaas Hugenholtz (1839 - 1900) and (one of) his brother(s), Petrus Hermannus Hugenholtz (1834 - 1911) were the two radical Protestant ministers who established the Vrije Gemeente (at what is now the famous music venue Paradiso) in 1877. The location has changed since then but the community still exists.
The brothers broke away from the Dutch Reformed Church because they considered it too conservative and embraced a liberal-humanist and Unitarian theology. Petrus Hermannus became a prolific writer as well as a gifted preacher and his community was the first in 19th century Holland to host a lecture on Buddhism (an indication of their heterodoxy, intellectual curiosity and tolerance). 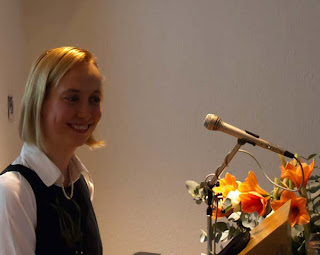 Me giving my lecture at the Vrije Gemeente

When I told them my unique connection to their community, they graciously welcomed me.
And so it happened: I crafted a lecture on 'Chayyim Tovim: a Jewish Spirituality of Mindfulness' and delivered it on Sunday 16th of January.
Before I ascended the dais, they excitedly announced to their congregants that after 140 years, they had another Hugenholtz speaking here. A great granddaughter, no less. I gazed upon the portrait of my great granduncle in the hallway and felt a great sense of honour and obligation. I am a Jew training for the rabbinate, to be sure. And yet I feel that I am continuing my family tradition.

True to my ancestors' form, my lecture was experimental. The premise was that if we can learn meditation from Buddhist tradition, be inspired by Sufi poetry and go on spiritual retreats at Catholic monasteries, then what principles can Judaism share as a spiritual practice?

I first carefully laid down the groundwork: clarifying the Jewish theology on human dignity and diversity, the role of Jews and non-Jews in a common project for tikkun olam (repairing the world) and on the risks of cultural appropriation. After laying the groundwork, I spoke about the universal relevance of such Jewish principles of rest, learning, prayer and conscious eating and suggested ways in which limited aspects of these practices could be integrated into one's spiritual life.

The community found the premise very interesting and thoroughly enjoyed themselves. After the lecture, there was an opportunity for asking questions and I had to chance to explain about the inner workings of my tradition and was able to address a few misconceptions about Judaism.

The event really struck to the core of what interfaith work means to me. It made me appreciate the openness of the Other and made me fall in love with my Judaism again. I felt proud and privileged to stand there on that dais. Privileged to be a Jew and a rabbinical student who is granted access to the multifaceted wisdom and meaning of Torah. And proud to be a descendant of a family in search of truth, beauty and wisdom wherever it may be found.

Like roots and branches, the universal and the particular blend splendidly sometimes.