Showing posts from October, 2018
Show All

A Measure of Sodom

October 30, 2018
Parashat Vayera 2018 Rabbi Esther Hugenholtz
The Characteristic of Sodom
The following story is entirely based on the sacred texts of our tradition: Torah and Midrash.
***
A pale sun hung low in the sky, casting long shadows on the proud edifices and statues framing the Central Square, etching forbidding lines into the pale, sleek marble, muting its gold detail. It was Spring[1], but with the waning of the day, a biting chill returned. Lot wrapped his grey coat tighter around him, plunging his left hand deeper into his coat pocket, while the fingers of his right hand nervously tracked his phone screen. He read the headlines and glanced around him. Tall, imposing screens mounted on the faces of the buildings blared out the news.
There was no shortage of opinions in this town, he grimly thought, each and every single one of them more horrific than the last. The media; broadcast, print, internet – it didn’t matter – glorified lies and cruelties. All propaganda from the City States. Lies about…
Post a comment
Read more

Louisville/Pittsburgh Vigil: From Where Does Our Help Come? 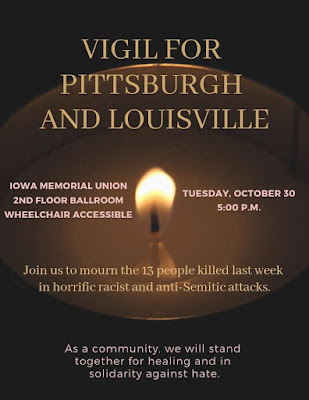 Vigil for Louisville and Pittsburgh, 30thOctober 2018, Iowa City Rabbi Esther Hugenholtz
Shir la’amot – A song of ascents. Essa einai el he’harim– I lift my eyes to the mountains Me’ayin yavo ezri– from where will my help come?
Dear brothers and sisters,
I’m an immigrant. Unlike many American children, I did not grow up watching ‘Mr. Rogers Neighborhood’ as a child. I was blessed to discover Mr. Rogers’ television ministry of humanitarian kindness as an adult and it has given me succor during turbulent times.
Mr. Rogers’ mythical television neighborhood – a place of hope and love - was set in Squirrel Hill, the Neighborhood where the Etz Chaim– Tree of Life – Synagogue stands.
There is a now-famous story that Mr. Rogers would share the comfort his own mother gave him. He said:
“’Look for the helpers. You will always find people who are helping.’ To this day, especially in times of disaster, I remember my mother’s words, and I am always comforted by realizing that there are still so many hel…
Post a comment
Read more

The God Who Sees 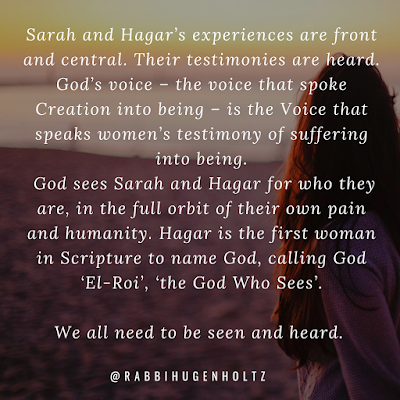 
The God Who Sees

For those of you who heard my High Holiday sermons, you may remember I might have speant a lot of time already on Parashat Lech Lecha. It was the opening words of Chapter 12 that carried us through a vision of t’shuvah and transformation for the season and that have shaped our consciousness of who Abraham and Sarah were. We hold them up to be spiritual giants, innovators, the openers of doors and the makers of souls. In the Midrashic imagination, Abraham is Judaism’s first and best missionary as he welcomes people into the Covenant with food, conversation and hospitality. In the modern imagination, he is the first activist who, unlike the passivity of Noach, doesn’t only obey God but challenges God. He is the great humanitarian who stays God’s hand for the sake of ten righteous individuals before the cities of Sodom and Gomorrah are overturned.
This is the Abrahamic paradigm we love and favor.
But the Torah is complex and th…
Post a comment
Read more

What A Difference A Letter Makes

October 07, 2018
Rabbi Esther Hugenholtz Sermon B’reishit 2018
What a Difference A Letter Makes
We live in a world of information overload. In fact, we are so super saturated by choice and by information, that it can actually paralyze us and shut us down. This phenomenon is called ‘decision fatigue’. What online newspaper to read? What cereal to choose in the supermarket aisle? What clothes to wear? What social media accounts to follow? In our hyper-complex world, we are spoilt for choice… and the choice can spoil us.
If anything, my theory is that Adam and Eve suffered from decision fatigue and I examined this in a sermon a number of years ago: the First Couple were completely confused by all the options in the Garden of Eden. After all God told them ‘hineh, natati lachem et kol esev zorea zera asher al p’nei chol ha’eretz’ – ‘behold, I give you all seed-bearing plants upon all the earth to eat.’ The word ‘kol’ (or ‘chol’) is repeated twice. In other words, Adam and Eve were like hipster vegans with a c…
Post a comment
Read more

What Is The Purpose of Religion? 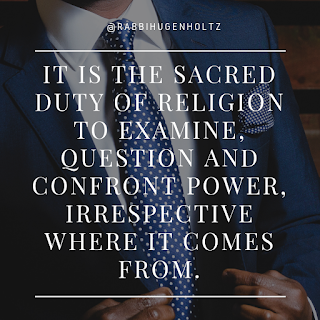 Sermon Shemini Atzeret Rabbi Esther Hugenholtz
What is the Purpose Of Religion?
This is probably a truism in the United States as well, but as a child in Europe I learned that there were three things that were considered impolite to discuss in polite society: politics, religion and matters pertaining to physical intimacy. Of course, when I studied cultural anthropology, these were exactly the questions I engaged with. Taboo is just another excuse for an anthropologist to get up, close and personal with the most hidden aspects of human nature.
This unrelenting and uninhibited curiosity serves one well when studying Jewish sacred literature. As Pirke Avot states: one who is shy, the ‘bayshan’, cannot learn. The sacred Jewish literary tradition oscillates between the sublime and the crude. There are plenty of difficult texts, satiated with misogyny, racism, homophobia, classism as well as dismally inaccurate science. The ability to have a multilayered, intertextual reading of the text is o…
Post a comment
Read more
More posts