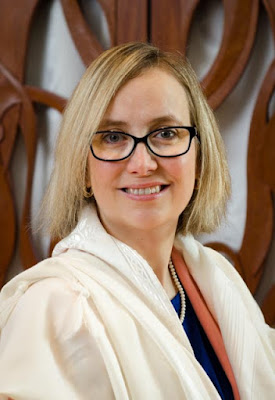 Rabbi Esther Hugenholtz (1978) was born in Amsterdam, the Netherlands. She spent the majority of her childhood in southern Spain. After completing her high school education, she moved back to the Netherlands where she obtained her M.Sc. (Master of Science) in Cultural Anthropology and Sociology of non-Western Societies from the University of Amsterdam. Furthering her Jewish education, she studied at the Conservative Yeshiva in Jerusalem, Israel and was an E. Levinas Fellow at Paideia, the European Institute of Jewish Studies in Stockholm, Sweden.

Esther completed the first two years of her rabbinical training at the Ziegler School of Rabbinic Studies, a seminary affiliated with the Conservative/Masorti movement of Judaism and interned as a Rabbinic Fellow at the American Jewish University. She completed the remaining three years of her rabbinical training at Leo Baeck College in London, UK and was ordained a rabbi with this seminary in 2013.
Rabbi Esther Hugenholtz has served as the Associate Rabbi at Sinai Synagogue in Leeds and is very excited to be the new Rabbi for Congregation Agudas Achim, Iowa City, Iowa.
In her free time, she enjoys composing liturgical music, songwriting, writing, travelling, photography and cooking. She takes an interest in issues of multiculturalism and social justice and firmly believes in representing a socially-relevant and spiritually-compelling Judaism for today’s world.
You can find her on Twitter and on Facebook.

Sermon Ki Tissa 2019 Rabbi Esther Hugenholtz
The Torah of Trauma
One of the most stunning lines from Psalms comes from Psalm 148: ‘HaRofeh lishvurey lev umechabesh le’atzvotam’ – ‘God is the Healer of the brokenness of heart and the binder of their wounds.’
Brokenness is a universal human experience: everyone has encountered brokenness in their lives, their world or in themselves. Of course, while brokenness is the great leveler, our experience of brokenness is not a level playing field. Some of us are subjected to greater trauma than others; some of us may have more access or resources to heal from or repair the brokenness we face. Nonetheless, I’d wager to say that as I give this sermon, there will a number of you who are encouraged to reflect on what is broken in your lives. It seems as inevitable as death.
To the mystical Kabbalists of the late Medieval period, brokenness was not just as inevitable as death but also inevitable to life. According to these esoteric thinkers, including…
Read more