All is One: the Jewish Path to Embodied Sanctity 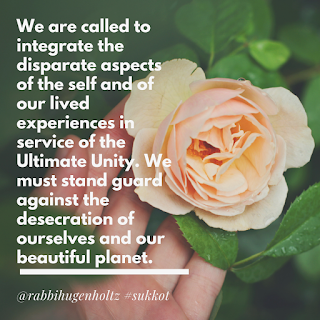 There are many legends and responses to the phenomenon of the lulav. Karaites (Jews who only follow Mikra, Scripture, and not the Oral Law, or Talmud) will dwell in booths during Sukkot but not bless the lulav, which they see as a rabbinic innovation. Likewise, Samaritans who were separated from the ancient Israelites after exile and war and only have the Torah, do not use a lulav either and dwell under canopies of fruit suspended in their homes. There are even some Reform and Reconstructionist Jews who have reinvented the lulav. Critiquing the economic and environmental costs of lulavim and etrogim, they have chosen to source local plants and fruits in a direct fulfillment of the Biblical commandment, yet in contravention of the classical Halakhah. All these are creative responses to an inherent tension: what are we to make of this rather strange and arcane ritual of shaking willow branches, myrtle, a palm frond and a Chinese citron?

We know what the Torah says:

‘V’lakachtem lachem bayom harishon p’ri etz hadar, kapottemarim, v’anaf etz avot v’arvei nachal, usamachtem lifneiAdonai Eloheichem shivat yamim.’ – ‘On the first day you shall take the product of hadar trees, branches of palm trees, boughs of leafy trees, and willows of the brook, and you shall rejoice before the Eternal your God seven days.’ Lev. 23:40

In the newsletter this week, I shared an article from the Times of Israel about the rabbinic origins of the etrog, the Chinese citron that made it to the Land of Israel in the early Rabbinic period and due to its unique status and enticing fragrance, became the fruit of choice to represent the ‘p’ri etz hadar’, the ‘fruit from the goodly (or glorious) tree’.

This choice for a citrus fruit from the Far East (instead of something locally-sourced from the Land of Israel instead, like a pomegranate perhaps) does nothing to diminish the weirdness of the lulav and etrog symbolism; on the contrary. We are left with a ritual that feels anachronistic, primitive and pagan. We might even feel a little self-conscious about shaking a magic rain stick to (quite literally) rustle rain from the Sky God.
Still, I believe this is exactly the power of ritual: the weirder, the better. These rituals are suprarational; they speak to a different order of experience. They confront us with the strangeness and mystery of life. We cannot live in a perfectly polished, planned and contained world. The world we live in is messy, strange and disorderly. Faced with that existential uncertainly, it is easy to imagine people reaching for the superstitious.

Still, the brilliance of our odd rituals is that they don’t appeal to the superstitious. That’s not the point. While there is always a risk of excess, the tefillin put in the baby’s crib, for instance, or the miracle stories surrounding mezuzot, this is more of a folk expressioof Judaism rather than normative theology. I’d say that davka the point of the lulav is to not effect superstition:
the verse from Leviticus tells us to take these plants and ‘usamachtem lifnei Adonai’ – ‘and rejoice before the Eternal’. The operative word here is joy, not magic. Just like the operative word for tefillin – another ritual high on the weirdness index – is to be reminded of God’s commandments, not to wear an amulet.

If it is our psychological constitution that is the object of the lulav, it is no surprise that there are a myriad interpretation of its constituent parts: the willow compared to the lips, the myrtle to the eyes, the palm frond to the spine and the etrog to the heart, each one coding for prayer, enlightenment, uprightness and wisdom according to the Sefer haChinukh, a late Midrash. According to another midrash, each of the four species represents different traits in the Jewish people. The etrog, having both taste and spell, represents those with both learning and mitzvot. The lulav, lacking in smell but having taste (through its fruit, dates) represents learning but not mitzvot. The myrtle, being fragrant but flavorless, represents mitzvot but no learning and the willow lacks either quality. All these combined represent the diversity within the Jewish community.

While these explanations help rationalize the ritual of lulav and etrog, a question still hangs in the air: why? What’s the value of the strange, arcane and ancient? Why not dismiss the ritual altogether?

What both Midrashic explanations illustrate is the essential subtext of this all: Judaism’s subversive claim of Divine Unity and of embodied sanctity. We do not chastise the eyes, the heart, the lips or the spine for being mere flesh and blood. We lift upthese organs to a higher purpose. We do not condemn the different approaches, of practice or theory, that Jews bring to their Jewish encounter. Instead, we try to learn from each other. The lulav and etrog are a protest against the dangerous bifurcation of our world, against the body-mind dichotomy, against the acrimonious divorce of Nature from God. Yes, this is radical, and non-dual. ‘Kadosh kadosh kadosh Adonai tzeva’ot, melo chol ha’aretz kevodo’ – ‘holy, holy, holy is the Eternal of hosts, for the whole Earth is filled with God’s glory.’ Sukkot, with its redemptive overtones, with its willingness to embrace the utopian alongside with the vulnerable, has no problem proclaiming to us that God dwells in all, that all of Creation is sacred and life lived in mortal, physical manifestations is also holy.

Yet the simple etrog and lulav, just as the temporal sukkah, remind us that we are part of a Greater Whole and we possess inherent sanctity and dignity. We are called to integrate the disparate aspects of the self and of our lived experiences in service of the Ultimate Unity. We are called to stand guard against the desecration of ourselves and our beautiful planet.And we pray in the Hashkiveinu evening prayer, that the SukkatShalom, the Tabernacle of Divine Peace, may be spread over all of us.

Let this be a gift that we can give to ourselves.
chol hamoed sermon sukkot

February 27, 2019
Sermon Ki Tissa 2019 Rabbi Esther Hugenholtz The Torah of Trauma  One of the most stunning lines from Psalms comes from Psalm 148: ‘ HaRofeh lishvurey lev umechabesh le’atzvotam ’ – ‘God is the Healer of the brokenness of heart and the binder of their wounds.’  Brokenness is a universal human experience: everyone has encountered brokenness in their lives, their world or in themselves. Of course, while brokenness is the great leveler, our experience of brokenness is not a level playing field. Some of us are subjected to greater trauma than others; some of us may have more access or resources to heal from or repair the brokenness we face. Nonetheless, I’d wager to say that as I give this sermon, there will a number of you who are encouraged to reflect on what is broken in your lives. It seems as inevitable as death.  To the mystical Kabbalists of the late Medieval period, brokenness was not just as inevitable as death but also inevitable to life. According to these eso
Read more

Parashat Acharei Mot 2019 Rabbi Esther Hugenholtz The Aftermath  ‘ Vayidom Aharon ’ – ‘and Aaron was silent’. Thus the Torah tells us, three parshiyot ago, before Parashat Tazria, Metzora and even our Parashah today, Acharei Mot. In Parashat Shemini, we read the chilling account of the death of Aaron’s sons, Nadav and Avihu. In a cryptic incident, they offer ‘aish zarah’, ‘alien fire’ upon the altar. Many commentators condemn them for defiling the newly-inaugurated Tabernacle through an unaccounted offering. Some commentators, like the Ohr haChaim, praise their initiative of religious enthusiasm and devotion. Be what may, God strikes the two young Priests down. Moses offers a strange response to the tragedy: “This is what the Eternal meant when God said, ‘through those near to Me I show Myself holy, and gain glory before all the people’.” (Lev. 10:3) Was Moses offering words of consolation or criticism? Was he channelings God’s condemnation or approval of the ‘aish
Read more 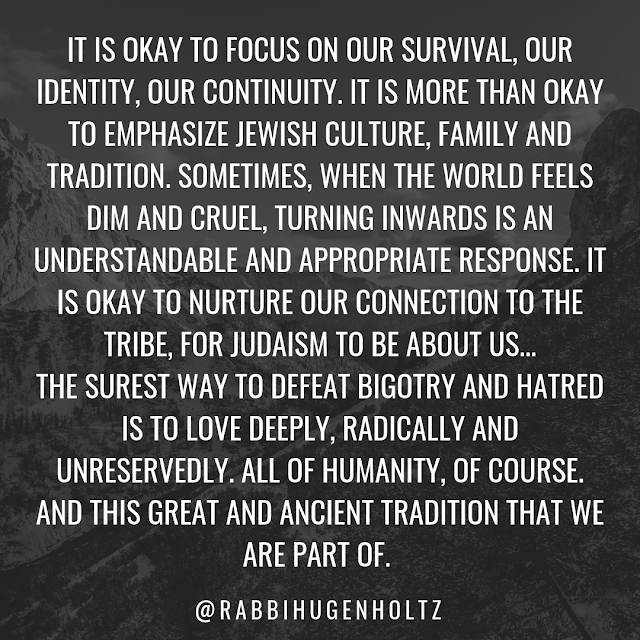 Sermon Vayetzei 2018 Rabbi Esther Hugenholtz It is About Us While I am sure every generation feels the weight of its own history, there is no denying that recent global and national events press upon us. So many overused metaphors come to mind: a refiner’s fire, an alchemist’s crucible, as we must distill what we value down to its essence. These times focus our attention and remind us, grudgingly perhaps, that ‘aleinu’, it is up to  us .   I suspect many of us are still sorting and sifting through our emotions. I know I am. As we contend with complex issues of polarization, hatred, the call for increased security, the inability to speak to difference and the myriad reflections on our American Jewish identities, one thing stands out clearly for me as a non-Orthodox, ‘Reformative’ rabbi. This is the hour of  our  Judaism.  Reflecting on the Pittsburgh massacre, we can see that the congregations of Etz Haim Synagogue shares many of our values. Anti-Semitism
Read more